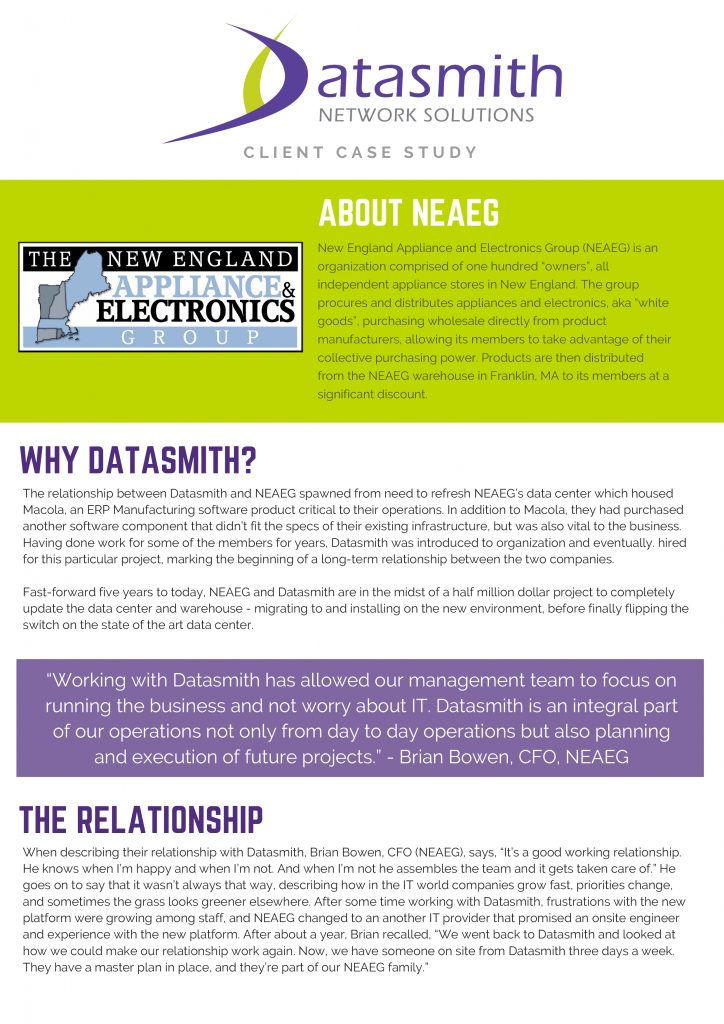 New England Appliance and Electronics Group (NEAEG) is an organization comprised of one hundred “owners”, all independent appliance stores in New England. The group procures and distributes appliances and electronics, aka “white goods”, purchasing wholesale directly from product manufacturers, allowing its members to take advantage of their collective purchasing power. Products are then distributed from the NEAEG warehouse in Franklin, MA to its members at a significant discount.

The relationship between Datasmith and NEAEG spawned from need to refresh NEAEG’s data center which housed Macola, an ERP Manufacturing software product critical to their operations. In addition to Macola, they had purchased another software component that didn’t fit the specs of their existing infrastructure, but was also vital to the business. Having done work for some of the members for years, Datasmith was introduced to organization and eventually. hired for this particular project, marking the beginning of a long-term relationship between the two companies.

Fast-forward five years to today, NEAEG and Datasmith are in the midst of a half million dollar project to completely update the data center and warehouse – migrating to and installing on the new environment, before finally flipping the switch on the state of the art data center.

“Working with Datasmith has allowed our management team to focus on running the business and not worry about IT. Datasmith is an integral part of our operations not only from day to day operations but also planning and execution of future projects.” – Brian Bowen, CFO, NEAEG

When describing their relationship with Datasmith, Brian Bowen, CFO (NEAEG), says, “It’s a good working relationship. He knows when I’m happy and when I’m not. And when I’m not he assembles the team and it gets taken care of.” He goes on to say that it wasn’t always that way, describing how in the IT world companies grow fast, priorities change, and sometimes the grass looks greener elsewhere. After some time working with Datasmith, frustrations with the new platform were growing among staff, and NEAEG changed to another IT provider that promised an onsite engineer and experience with the new platform. After about a year, Brian recalled, “We went back to Datasmith and looked at how we could make our relationship work again. Now, we have someone on site from Datasmith three days a week. They have a master plan in place, and they’re part of our NEAEG family.”

PART OF THE TEAM

The Datasmith team member plays a critical role in managing the daily aspects of IT at NEAEG, including working with the other IT vendors that are engaged with the company. Specifically, he is an expert admin when it comes to working with Epicor P21 (Prophet 21), a cloud-based ordering site that imports info back and forth with about 85% of their business. Datasmith sits at the core of these functions, and the full service approach of having a dedicated person on site has helped facilitate NEAEG’s continued growth.

“Disaster Recovery is key in the IT world,” notes Brian. “We ship $1.6M out of the warehouse a day. We can’t be down. If our owners can’t buy and secure product, then that’s a problem… This is why we work so closely with Paul and his team at Datasmith. There’s a lot of trust, loyalty, and dependability.”

When asked what he liked most about working with Datasmith, Brian responded, “I don’t need to micromanage them. We have weekly phone calls where we discuss projects, challenges, and that’s it. Professionalism and the trust factor, and the understanding that whatever the objective is, it’s going to get done.” He added that in this work, documentation is critical, and Datasmith has met their needs and then some. Detailed project plans and continuous oversight, especially with this significant data center refresh, show they more than do their homework.

In the five years since NEAEG and Datasmith began working together, NEAEG’s revenue has grown over $80M and that’s due in no small part to the stability and reliability of their networking and infrastructure managed by Datasmith.

“Working with a company such as Datasmith has allowed our management team to focus on running the business and not worry about IT. Datasmith is an integral part of our operations not only from day to day operations but also planning and execution of future projects,” noted Brian. “Outsourcing our IT is of great value to us as we can leverage many areas of expertise in a single call. Hiring all the necessary employees to cover these areas would be cost prohibitive to us or any small/midrange company.”